This page is an ongoing log of cooking contest awards and recognitions:

I am VERY honored to say that I earned the 3rd place spot in the dessert category of the "Superbowl of Food!"


For the dignature dish,  I made a "Tipsy Rockin' Root Beer Float Cupcake."  It was a chocolate root beer cupcake stuffed with root beer liqueur infused chocolate cream, topped with vanilla buttercream frosting, and garnished with chocolate covered PoP Rocks!  It was so FUN!
Our structured dish theme was New Orleans.  I wanted to do something traditional and different all in the same dish, so I did a blueberry basil beignet with a white chocolate lemon curd.  This dish bumped me up 10 spots to land me in 6th place after the preliminary round!

For the Top Ten, our infused ingredient was citrus.  My Naked Vanilla Key Lime Mini Cakes landed me a third place overall finish and a happy heart!  I'm so proud of these little babies!!!


US Potato Board #TopTater Contest, Fall 2014

I don't know anyone who doesn't LOVE potatoes!  I love 'em!  This was a great contest with a great prize that helped my buy ingredients for WFC2014!  My Cheddar Chorizo Hash Stacks with Chipotle Mango Salsa incorporate so many of my favorite flavors!

Kenmore and the cookmore.com website are some of my favorite people.  I was honored to qualify for the 2014 World Food Championships in the dessert category with my Kahlua Pig Chocolate Cake!  It's a Kahlua liqueur infused chocolate cake with chocolate mousse filling, chocolate ganache frosting and a macadamia nut and bacon brittle garnish!

Five winners were selected to compete in the World Food Championships from the WFC FoodChamp Challenge - Bacon.  I was honored to be the blog champ in this category.  My Bacon Stuffed Apples with Vanilla Bourbon Sauce allowed me to compete with some of the best chefs on earth! 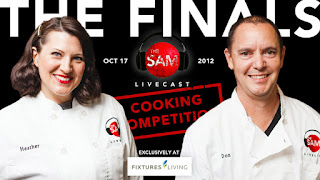 Out of eight competitors, I made it to the final two and took second place.  I have been a huge fan of Sam the Cooking Guy for many years and it was such an honor just to be able to cook in "the red kitchen!"  There were three rounds, in which I made three dishes, pictured below:

I was honored and excited to be one of the the five finalists in the Real Women of Philadelphia Delicious Dreamtrips Giveaway for France!  This was honestly my favorite recipe and video that was submitted for this portion of the contest season, so I'm really excited that it got selected!


This is one of the best recipes I've made in a long time.  www.skinnydecadence.com's Curried Chicken Stir-Fry is DELICIOUS, and I was lucky enough to take first place in their video contest for week 1.

Week 2 was another win, second place this time, with their beautiful Fetuccine with Pesto, Chicken and Asparagus.  This is a PERFECT dish for a light spring dinner!


My friend Mary has an AWESOME blog with lots of healthy (and some not so healthy) recipes.  PLEASE check her out at www.skinnydecadence.com


Real Women of Philadelphia, Cookbook Contest 2011
It always feels good to get constant positive feedback from a company like Kraft Foods, Inc.  Their competitive website, http://www.realwomenofphiladelphia.com/, has blessed me with more contest wins than any other website or competition I've entered.
My Peanut Butter S'mores Shooters won for their cookbook contest in October of 2011.  This was the second year I was chosen to be a contributor to their community cookbook, featuring lots of delicious recipes featuring Philadelphia Cream Cheese!
Last fall, my family and I made as many different types of S’mores as we could around a back yard camp fire. There were Caramel Apple S’mores, traditional S’mores and Peppermint S’mores, but the hands-down winner was the Peanut Butter Chocolate S’more! This cute little shooter encompasses all your favorite flavors and uses my absolute favorite recipe for peanut butter crème, with Philly!

I had the honor of competing in the Aetna Healthy Food Fight as a regional finalist for the second year in a row.  This year was a somewhat scaled-back event, but the staff and the judges were still a blessing and treat to work with.
I wanted to submit this recipe last year, but they had a $12.00 recipe cost limit.  I was pleased to see that the limit was increased to $25.00, which gave me the green light to give them one of my best recipes.


Dessert...It's always the big finish to a wonderful meal, or a better finish to a terrible meal.  There aren't many desserts that I don't like.  In fact, I can't even think of one so let's just go ahead and say that I love them all!  My favorite, you ask?  Well, that's easy...it's the one that just earned me the VERY last spot in the FINALS for Real Women of Philadelphia's Season Two, my QUADRUPLE B'S!
These DELICIOUS Banana Cheesecake Blondies (Quadruple B stands for Better Blonde Banana Brownies) are easy to make and are just perfectly over the top with a big scoop of vanilla ice cream and a big drizzle of caramel syrup.

I was sent to Savannah, Georgia to cook with 15 other WONDERFUL women and Paula Deen!  I didn't win the grand prize of $25,000, but this was definitely a high point in my cooking career and one of my life's amazing moments!  Life just keeps getting better and better!

Facebook Superfan May 30 - June 6, 2011 - I created a delicious berry and wine sorbet for Memorial Day weekend using my favorite California Red, Ménage à Trois.  I posted the recipe on their Facebook page, and the following day, I was awarded their weekly "Superfan" award.  Thanks guys!

I'm always gushing about what a special community the Kraft Real Women of Philadelphia (RWOP) website is, but today, I received a huge honor from some of my favorite people.  My "How To" video for Southwest Macaroni and Cheese has been selected as the winner for Philadelphia Cooking Creme's Santa Fe Blend Category!  I won $2500 and now the recipe will be featured on the label of Philadelphia Cooking Creme!
This is SO special to me, not only because it was my favorite flavor of the four (obviously I like the Southwest flavors best), but my trip to Sedona was truly SO magical, I guess a little of the magic stayed with me up until it was time for the judges to pick a winner!
This is a simple and quick Mac N Cheese that's packed with flavor and heat!

We all know that I love San Diego native ingredients, and strawberries are no exception.  Did you know that San Diego County is one of the largest producers of California Strawberries and, in 2007, about 87% of the nation's strawberries came from the state of California?  That's amazing! (http://www.calstrawberry.com/commission/backgrounder.asp)

My Skinny Tropical Dessert Nachos were a winner in their December 2010 recipe contest, and I'm honored to get a nod directly from the source of one of my favorite foods...STRAWBERRIES!


Apple chips are the base of this light but decadent no-cook tropical fruit dessert with just a hint of a mint finish. If you can't find the apple chips, banana chips or thinly sliced apple wedges work just as well!


I was a regional winner for the San Diego edition of the Aetna Healthy Food Fight in 2010.  The winner went to Los Angeles for the national finals and cooked Thanksgiving dinner for Bobby Flay.  The winner of the national finals gained the title of America's Healthiest Cook and won $10,000 in kitchen appliances.
I was lucky enough to be part of yet another positive and encouraging cooking competition.  Everyone at the regional event was so kind and welcoming, I immediately felt like a part of their family.  They had been traveling around the country for the last two months holding regional cook-offs and none of them even seemed a bit tired.  The head chef of the event, "Chef Frank," even had a three month old daughter he hadn't seen since she was first born.  That's dedication.

We were scored on nutrition, the top 48 scores went to the regional cook-off.  From there, we wer scored on presentation (15 points) and taste (50 points).  I submitted a version of my Fall Spice Hash and was grateful to be selected as one of the 48 healthiest dishes in San Diego.  I've posted some pics of the presentation below, and I got some great feedback on taste.  I feel like I did the absolute best I could.  I didn't win the regional finals, but that's simply because it was someone else's time to shine!

Kraft, Philadelphia Cream Cheese and the beautiful Paula Deen (and her butter!) have all teamed up for an incredible contest.  Each week there's a different theme and dish classification and each recipe submitted must have at least 2 oz. of Philadelphia Cream Cheese.  There was a video contest, hosts were chosen, there's a cookbook in the works and EVERY DAY SOMEONE WINS $500!

I found out a couple of weeks late, so I missed the first two entries, but as soon as I could, I started feverishly writing down, photographing and submitting my recipes in hopes of scoring in the cookbook and winning ALL the money $$$$$$ !!!!!!
I knew the competition would be rough...I watch Food Network A LOT and I've seen those bake-off challenges.  They're brutal!
So, needless to say I was expecting cut-throat competition, school-girl drama, and lots of politics.  I went in with my battle armor on and my nose in the air.  OOPS.
What I didn't realize, was that this was a beautiful COMMUNITY, full of gorgeous people who support, encourage and love each other...and their recipes!  There's no drama, no politics (from what I can see) and some of the biggest competitors, who've already taken home their winnings, are sticking around to kick us "newbies" in the pants and keep us going.
I can honestly say that I am SO proud of being one of Philly's Real Women, and I am truly honored and humbled by all the encouragement, support and recognition I've been given.  The 500 smackaroos I've been hoping for would now just be the icing on the cake to all the other wonderful doors this competition has opened for me.  ﻿